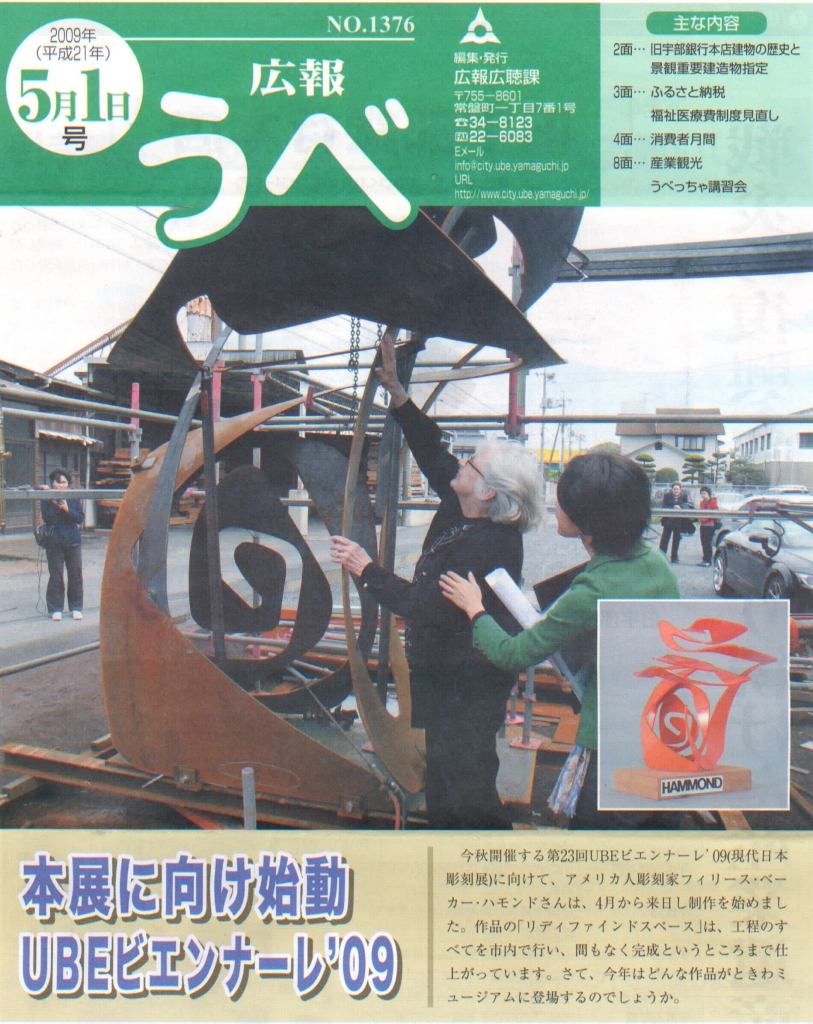 Article on the exhibition in Ube newspaper. 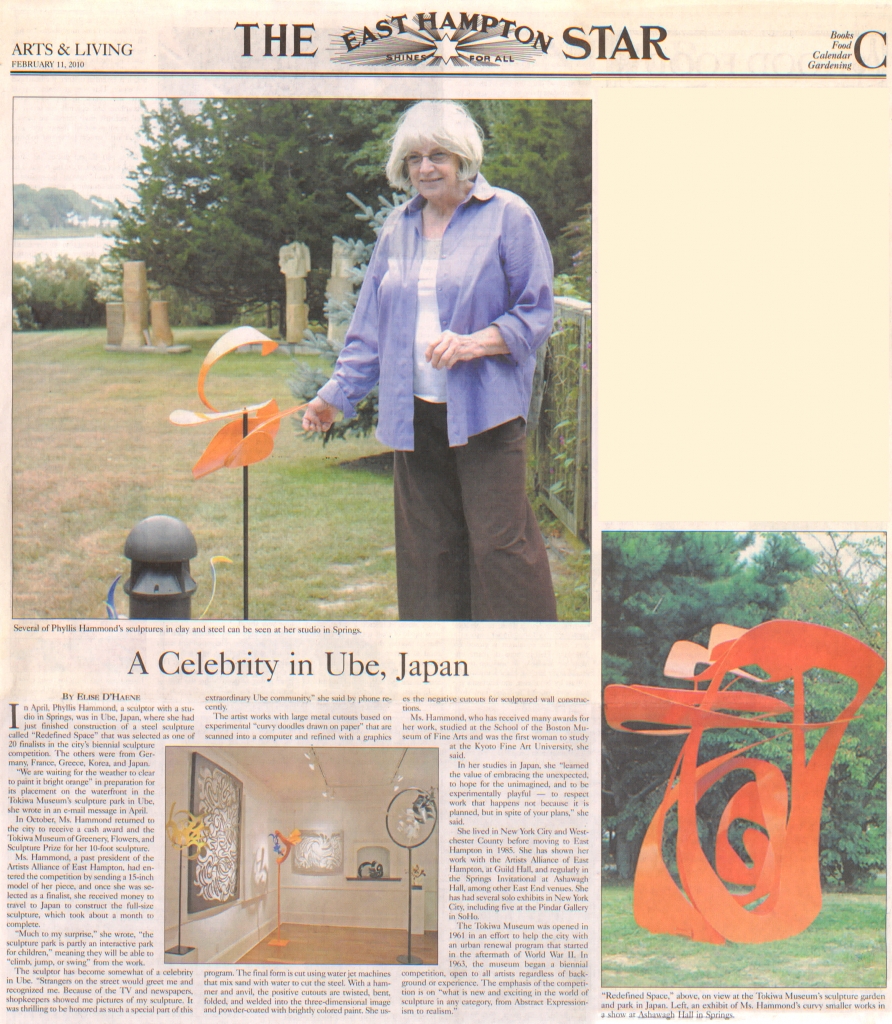 An article in the East Hampton Star on the exhibition in Japan. 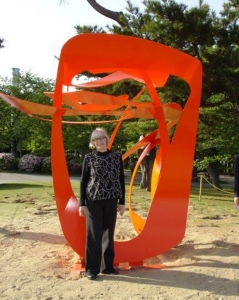 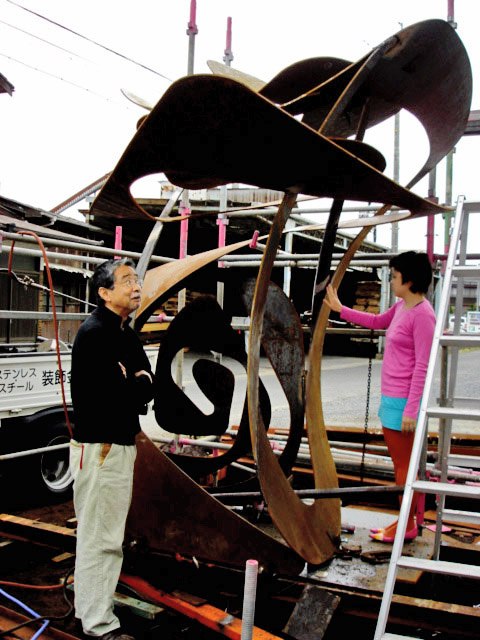 Akira Sasaki and his daughter Andrea Sasaki with my sculpture in process. Both are architects. They were immensely helpful during the fabrication of my sculpture. 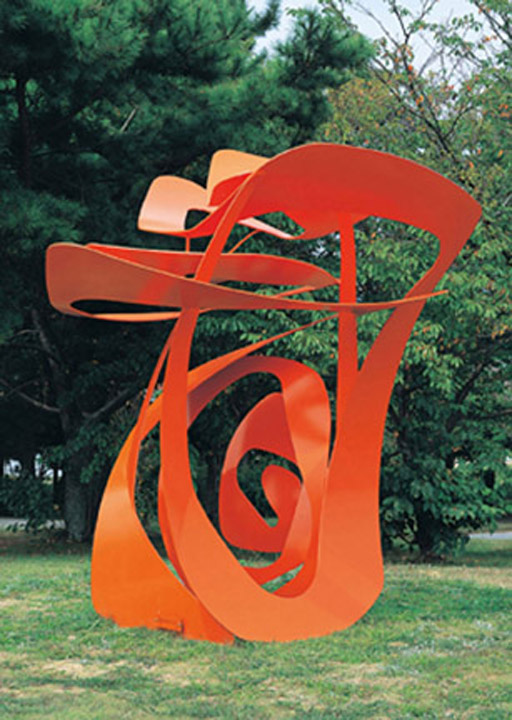 In 2009 I won an award in the Ube Tokiwa Museum’s 23rd International Biennale sculpture competition.

Ube was one of the first Japanese cities bombed in WWII. It had been the site of a large chemical plant. The city was totally demolished, and a lake was created where the chemical plant had been. During the rehabilitation period after WWII, the citizens of Ube created a campaign to beautify the area with greenery and flowers. The Tokiwa Museum was opened in 1961. A huge sculpture park around the lake was eventually created, and in 1963 the first Biennale was held.  Originally known as the “Ube Exhibition of Outdoor Sculpture”, it was the very first large-scale sculpture exhibition ever held in Japan.

The award I received included travel costs,  the cost of fabricating the sculpture,  and a cash prize.  I had built a 15″ aluminum model of the sculpture and traveled to Ube in 2009 to oversee the construction of the full scale piece in steel, which is 12′ x 9′ x 9′. When I arrived, I was greeted with polite shock by the museum officials, who had assumed until they set eyes on me that I was male. In the group of 39 artists selected for the show, I was the only woman. I later learned that among the many hundreds of artists included in the whole 23 year history of the show, I was one of exactly three women.

My Earliest Memories of Art

The seeds  were planted early. My first working space was a closet. To my five year old eyes it seemed large. I had a shelf-type table across the back of the closet that I used as a desk. There was an overhead light. I did my first drawings from memory, drawings I thought were terrible and distorted compared to what people really looked like. I abandoned that mode of work, copied comic strips and cartoons.

When I was in second grade mom sent me to oil-painting lessons on Saturdays. The teacher put emphasis on how to copy paintings by making a grid.

My mother sent me with pictures to copy: a photo of my grandfather, someone else’s drawing of a Scottie dog like the one we owned.
I liked to draw small doodles, imagining land contours, ends connecting to the water edges like maps. I made carvings in ivory soap, and figures I built in snow thrilled the neighbors. A pastel drawing of a fish made in 5th grade was stolen by a classmate, which I took as a symbol of success.

In the 6th grade I journeyed to the Boston Museum on Saturdays, by myself, for a drawing class. It was a one hour train ride to Bay Back station, then two subway changes to reach Huntington Avenue. Miles from home, I sat looking at plaster statues of  classical Roman or Greek figures in a huge freezing room. Trying every week to make my pencil replicate what I was seeing, I felt like a speck overwhelmed by the space and scale.