This author has not yet filled in any details.
So far Phyllis has created 28 blog entries. 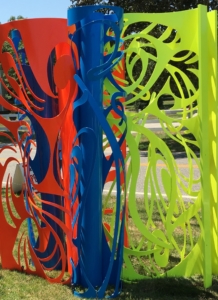 Dag Hammarskjold Plaza: Beyond the Edge 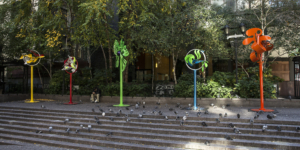 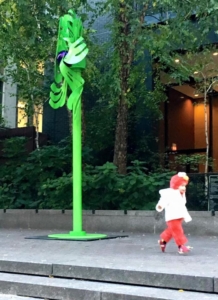 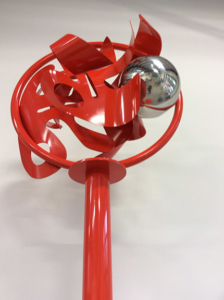 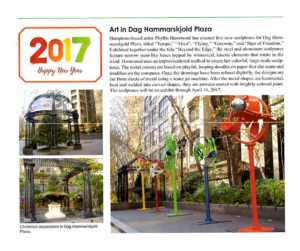 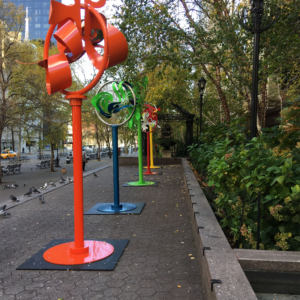 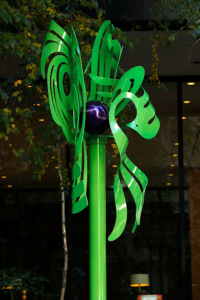 My installation in Summit, New Jersey 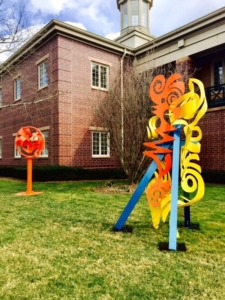 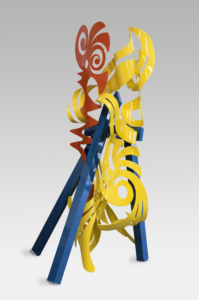 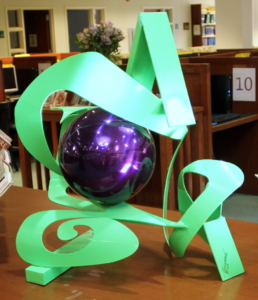 Phyllis Hammond’s Springs studio is a maze of colorful aluminum sculptures. Mark Segal Photos
The artistic career of Phyllis Hammond, a Springs sculptor, began almost 80 years ago when, as an 8-year-old, she took a one-hour train trip all by herself from Melrose, Mass., to the Museum of Fine Arts in Boston to sketch the Greek and Roman sculptures there. Not too much has fazed her since then.

When she was 24, for example, divorced and living with her 2-year-old daughter on Cape Cod, Hurricane Carol took dead aim at the Cape and killed eight of her neighbors. She had to rebuild almost the entire house. “What I did next was take myself back to the museum school,” she recalled. “I had no formal training. I made a portfolio, was accepted, and once I put my foot in the door it was seven years before I emerged.”

When she did, it was with a one-year travel scholarship to any country in the world. Rather than go somewhere in Europe, at that point still the epicenter of modern art, she opted for Japan, where she was the first American woman to study at the Kyoto City College of Fine Arts.

Back in the States, one of Ms. Hammond’s earliest jobs was making schematic drawings, first for mainframe computer manuals, then at Raytheon for Patriot missiles. “There were 50 draftsmen at Raytheon and only two were women. The other woman went to M.I.T.” She also worked as a dinnerware designer for Corning, but it was teaching that sustained her for much of her career.

“I’d work really hard on my art, have an exhibition, and then go back to teaching again for two years. Once I paid off my debts, I’d quit teaching and go back to the studio.”

Now 86, Ms. Hammond shows no sign of slowing down. In October she installed five new steel and aluminum sculptures in Dag Hammarskjold Plaza in Manhattan and four more at the Summit Library in New Jersey. Her vast studio and its grounds are filled with recently finished pieces, works in progress, and 40 years’ worth of clay sculpture. In 1960, when she was just out of college and newly married, her mother-in-law gave her enough money to buy a large, state-of-the-art kiln, which she kept until a year ago. Those early ceramic pieces included cylinders, two or three feet tall, whose openings revealed portions of human faces. These works eventually gave way to tall monoliths built of stoneware slabs, again with faces peering out from the abstract, drapery-like material, reminiscent of the emergence of Michelangelo’s unfinished slaves from the marble.

“That kiln made it possible for me to make huge clay sculptures and to entirely fill the 2,500-square-foot Pindar Gallery in SoHo with five solo shows over 10 years,” she remembered. “I was doing whole environments.” She also showed at 112 Greene Street and at the Howard Wise Gallery on West 57th Street.

The sculptor’s circumstances changed in 1984, when she married Dr. Aldo Perotto, a professor at the Albert Einstein College of Medicine. That summer, they stayed with his closest friend, Dr. Ed Delagi, at his house on Gerard Drive in Springs, and the next year they bought a house of their own on nearby Neck Path. When Dr. Perotto retired in 1995, they sold their year-round house in Briarcliff Manor, N.Y., and moved full-time to Springs.

Ms. Hammond was ready to say goodbye to clay. “I wanted to reinvent myself.” She was teaching a class for adults at Pierson High School at the time, and it sent her, unexpectedly, in a new direction, via a class project that began with the students drawing lines on large sheets of paper. “I encouraged them to scribble, to experiment. Then they would color in the negative spaces, cut them out, and put them together as paper sculptures.”

That was the genesis of her work today. Her sculptures start with spontaneously doodled pencil drawings, which she then redraws in more detail and scans into a computer. Software converts the drawings into a vector program, which can be read by a waterjet machine that cuts the shapes from 4-by-8-foot sheets of aluminum.

“After that, you have what will become the sculpture and what was cut out,” she said. “I figured out how to use the throwaway piece, so you have the positive and negative, which can even be combined in a two-panel piece.”

She refines the aluminum shapes with a hammer and anvil and takes them to Liberty Iron Work in Southampton, where they are fed into a rolling machine. The final step is powder-coating. The finished pieces exist as individual units but also as elements of eight-foot screens, which engage with each other and the viewer in a constantly changing visual dialogue.

Dr. Perotto and Ms. Hammond moved to a three-acre parcel on Springs-Fireplace Road with a view of Accabonac Harbor in 2000. Charles Forberg, the architect of LongHouse, also designed their house, with exterior walls of concrete and cedar.

The studio, which has four large glass garage doors, was built five years ago. Ms. Hammond has made it available to other artists, including Bill King, who worked there for three years before his death last year. He gave her pieces of his work in return, but, she said, his more important gift was advice. “The first thing he said to me was, ‘Don’t worry about money. Just make the work, the money will come.’ Nobody had ever said anything like that to me. So I did just that. It was so liberating.”

Another barterer to whom she is grateful is John Deben, the owner of Liberty Iron Work and an art collector who has sent his welders to work in her studio and given her free time on the rolling machine in exchange for some of her earlier ceramic pieces.

Four of Ms. Hammond’s works are spending the next six months at the library in Summit, N.J. 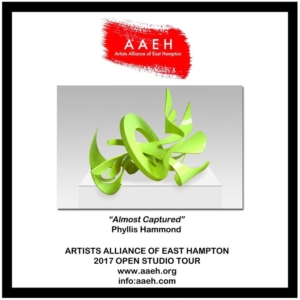 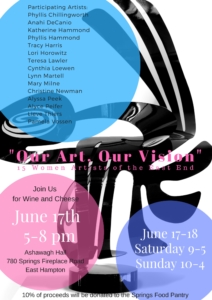 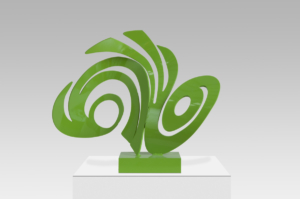 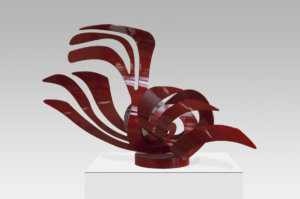 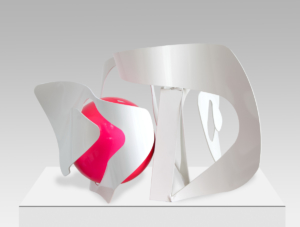 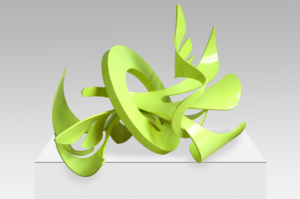 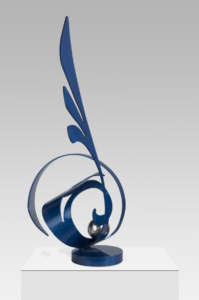 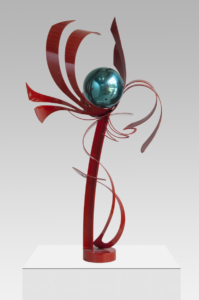 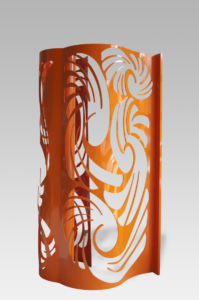 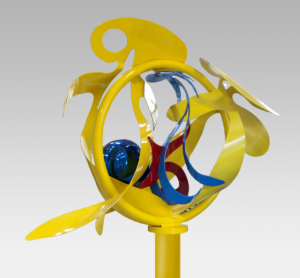 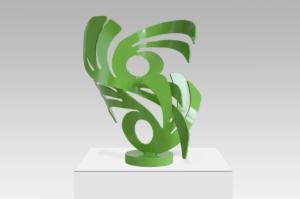 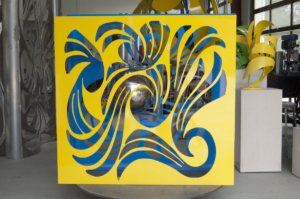 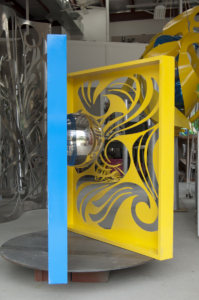 Journey of the Kiln

In 1960 I was working in clay, and my mother-in-law gave me an amazing gift: $2000 to buy a large state-of-the-art gas kiln. My husband at the time asked me “Wouldn’t you rather have a mink coat?”, but I persevered with the kiln purchase. It was an incredible asset to my work. It made it possible to make huge clay sculptures I would not have been able to make otherwise, and to entirely fill the Pindar Gallery in NYC (2500 square feet!) with five solo shows over ten years.
I’ve long since moved on to work in metal, and sold the kiln recently to the art department of Ocean County College in Tom’s River, NJ. Professor Lisa K Cecere came with four of her students to load the kiln for transport. They were a joy: so animated and delighted to see so much large-scale work in clay. Later I was forwarded this email from Lisa:

“Please tell Phyllis that my students so enjoyed meeting her…as did I.
We had dinner on the road…and they were just enamored. It was lovely as they exchanged stories of the conversations each one had with Phyllis and they each came away with something different. But concluded the same thing….how wonderful it was to spend the afternoon there.
They story of our day will be talked about with my other students for quite sometime.” 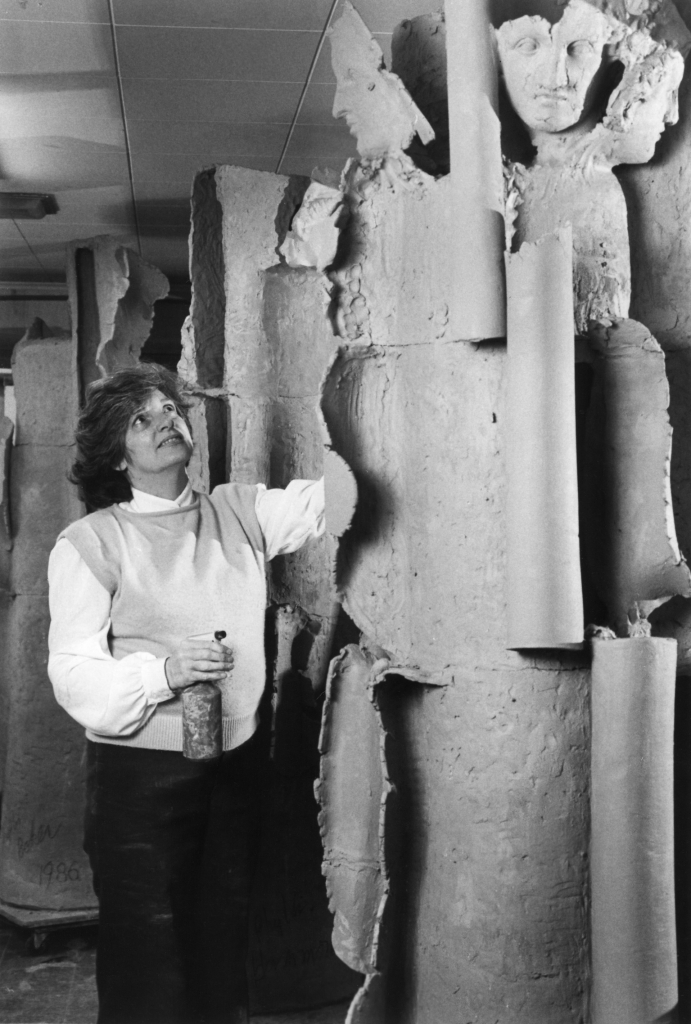 My great grandparents on my father’s side, Mary Gillis McSween and Hugh McSween. Mary was a full-blood Mi’kmaq Indian, from Nova Scotia, adopted by the Gillis family. She lived to be 107 years old, and eventually moved to Lynn, Massachusetts at the end of her life. 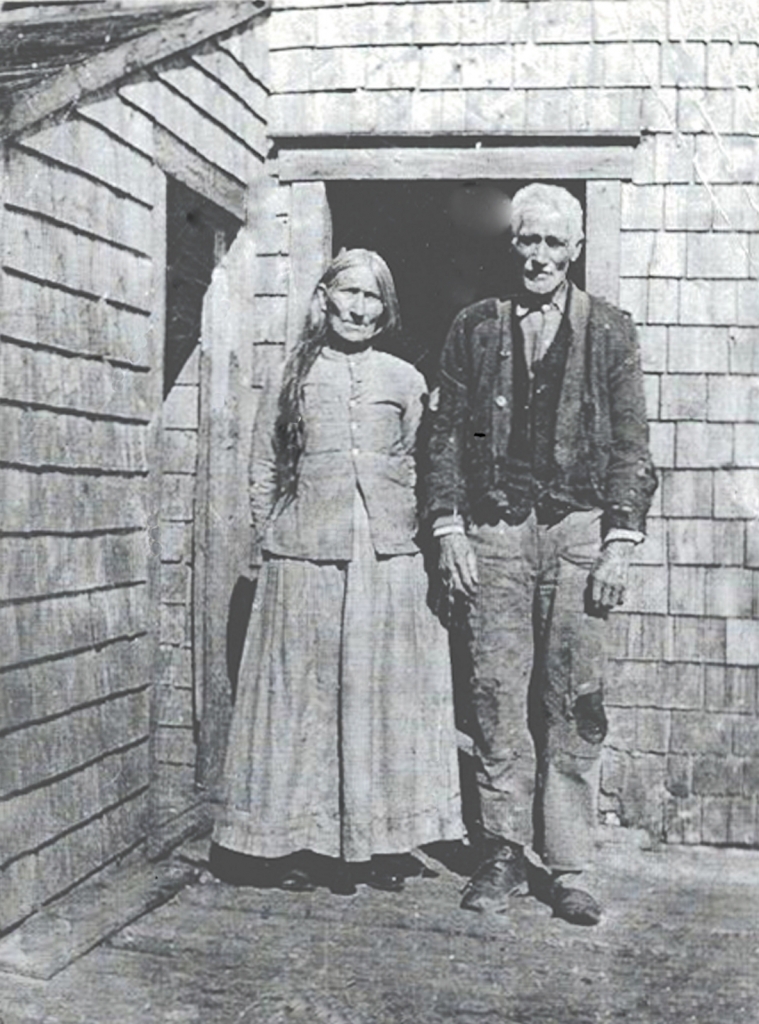 New work in process in the studio. 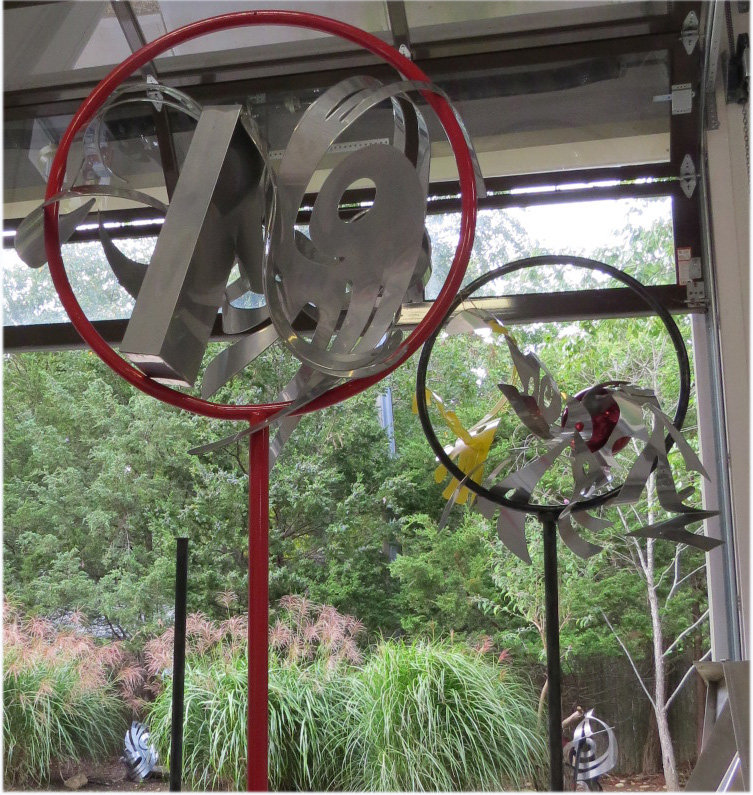 This series is destined for the United Nations Plaza in New York City. Installation will take place in May 2016. 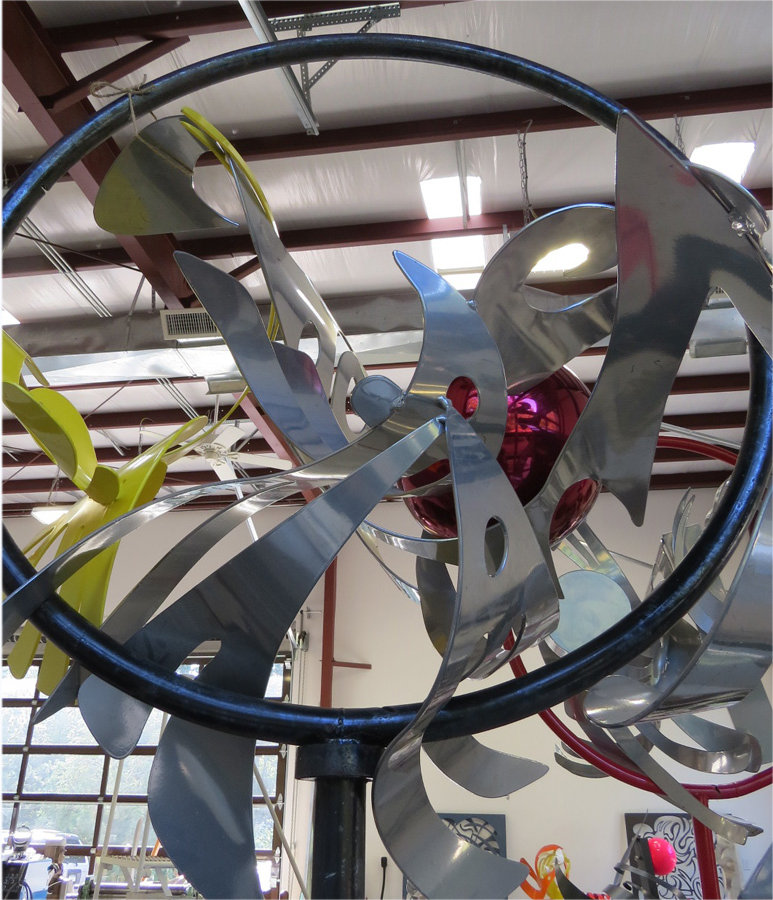 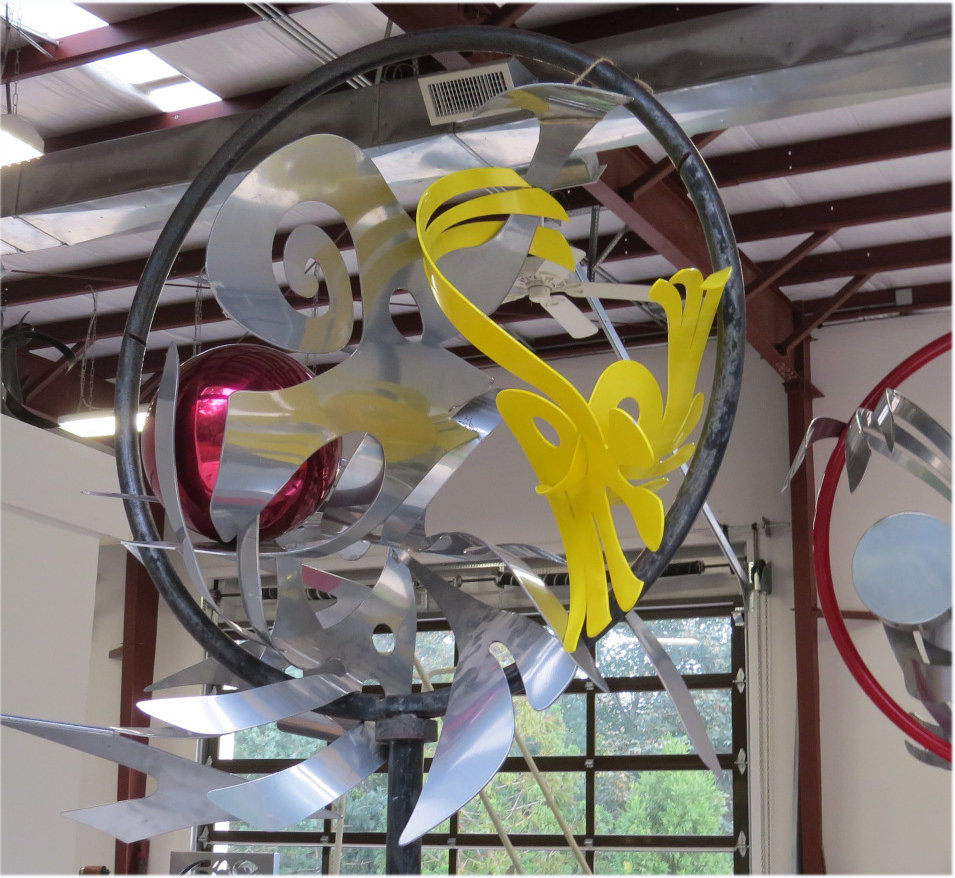