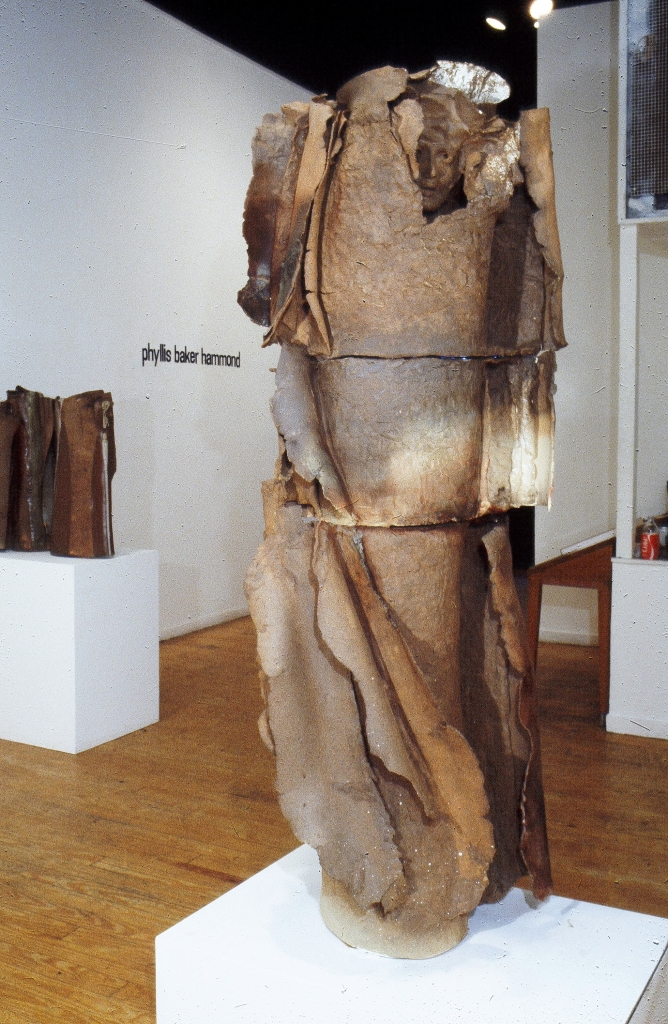 This essay was written by my dear friend, William Barrett. He was a professor of philosophy at New York University,  an editor of Partisan Review, and later the literary critic of The Atlantic Monthly. The essay appeared in the catalog accompanying my solo exhibition of clay sculptures at Pindar Gallery, NYC, in 1983.

When it comes to clay as a medium for serious art, we Americans tend to take an ambiguous attitude. We are willing to grant full honors to the craftsman, to the ceramicist and the potter, but we are likely to be far less open to the possibilities of clay for a freer and bolder kind of aesthetic expressions. Phyllis Hammond challenges this assumption, and that is one reason, among others, why she is a significant figure at the present time.

Not that she would, in any way, demean the art of the craftsman. On the contrary, her background and credentials here are impeccable; she is herself a ceramicist of taste and elegance, trained and disciplined in her craft. But the imagination is a driving force that sometimes acts in its own mysterious ways. A few years ago tiny faces and figures began to peep out of the vases and urns she was creating. They would not be suppressed, they insisted on being born. The procession of such figures has continued ever since getting ever freer, bolder and more expressive.

The evolution from craftsman to artist here has been one of the authentic developments in recent art. It is not a matter of contrivance, but comes from the depths of the artist’s imagination and unconscious. These figures forced their way forward; they would not be denied – they insisted upon being born. And perhaps this struggle to be born may be taken as the theme of her work.

In all of this she has, nevertheless, remained true to clay as her chosen medium. She has not gone over to other materials for her sculpture. Her work reminds us what powerful medium clay can still be, if we would but take it seriously and passionately. After all, the discovery of the potter and his wheel stands at the awesome beginnings of our civilization, and that is enough to shake the imagination.

However, Hammond soars, she does not leave the clay. The procession of haunting enigmatic figures that emerge in her work are struggling either to be born of the primordial earth, or are in the process of sinking back into it. They are figures either from a vanished civilization, or from one that has not yet been born – perhaps, both at once. And because we are all engaged, in one way or another, in our own personal struggles to be born, they are images that engage us all. Certainly, they are almost the more haunting and powerful figures given us by a recent art, and Hammond has already established herself as an artist of rare originality and force.